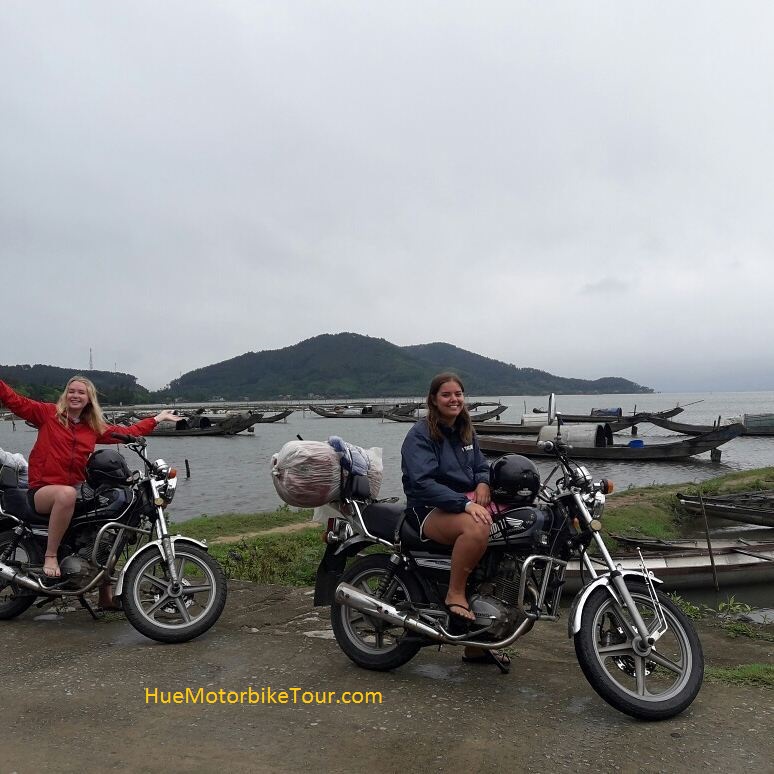 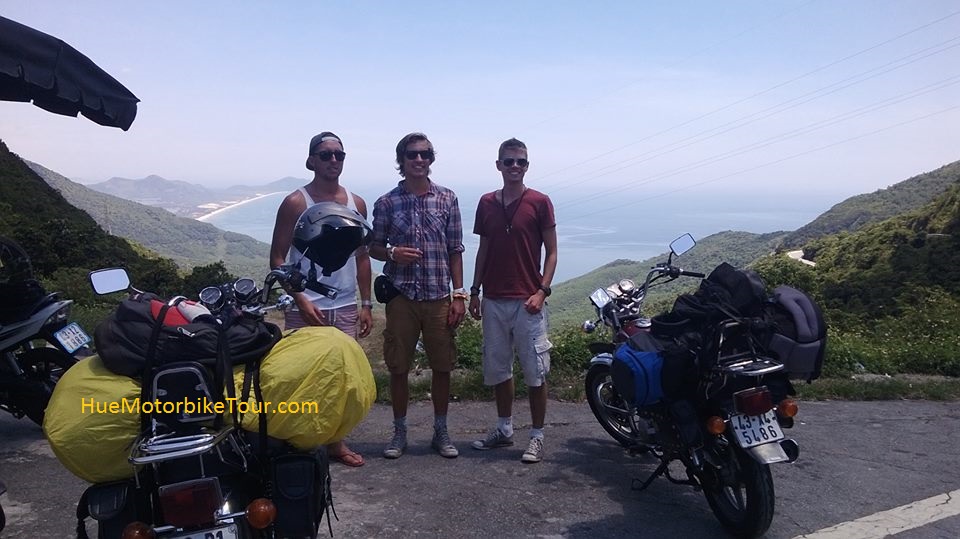 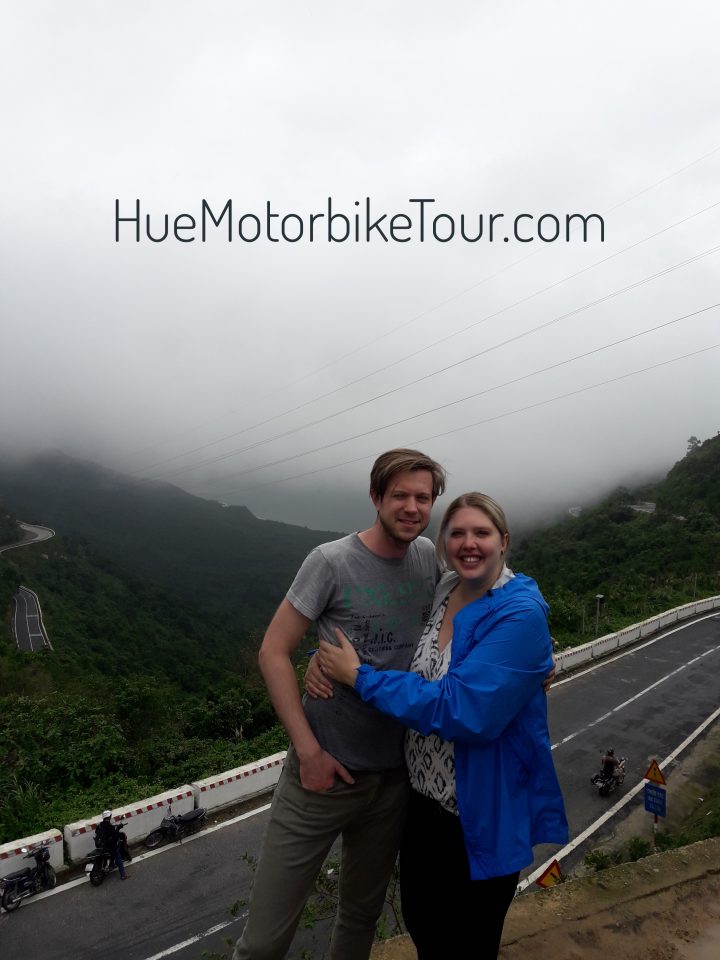 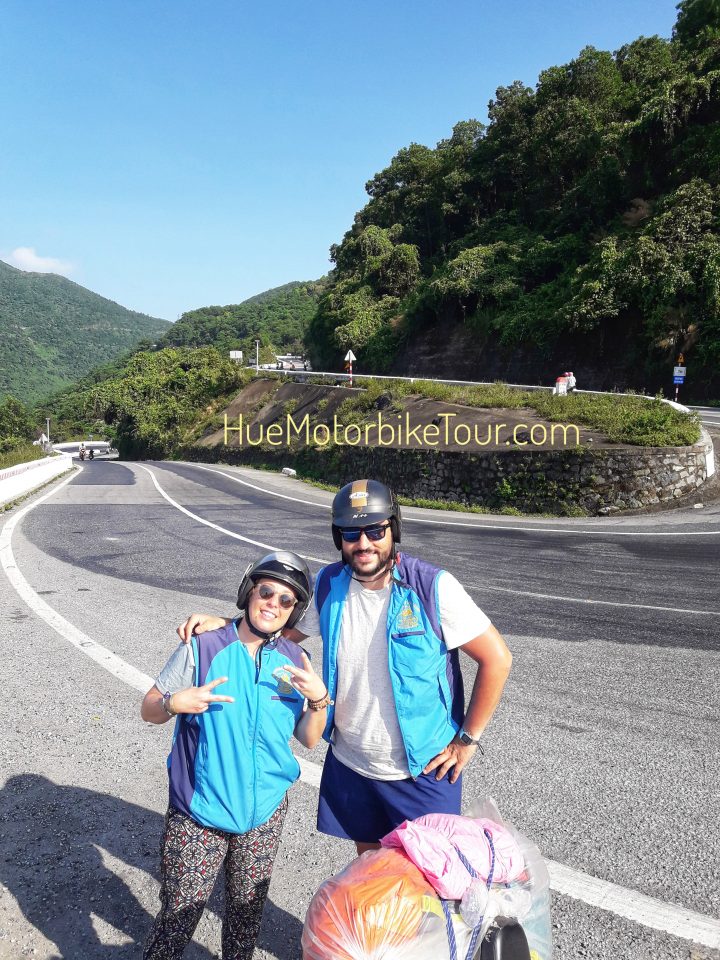 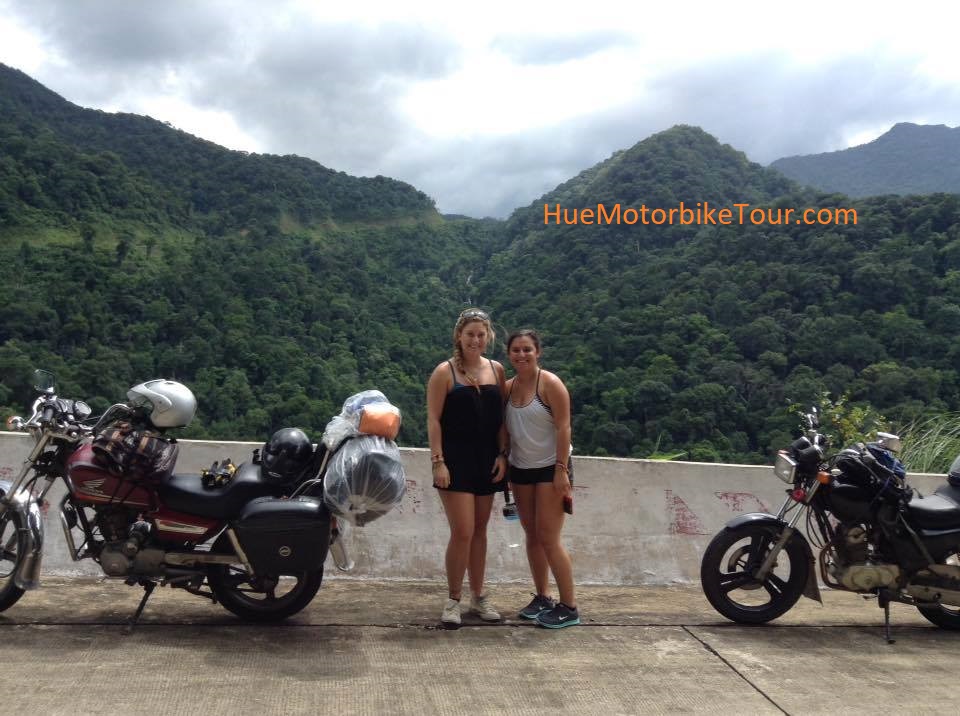 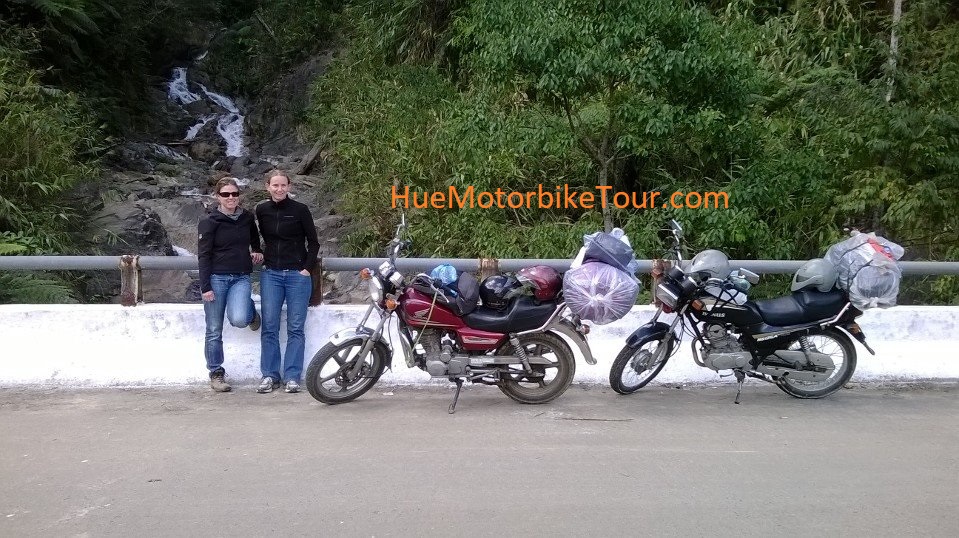 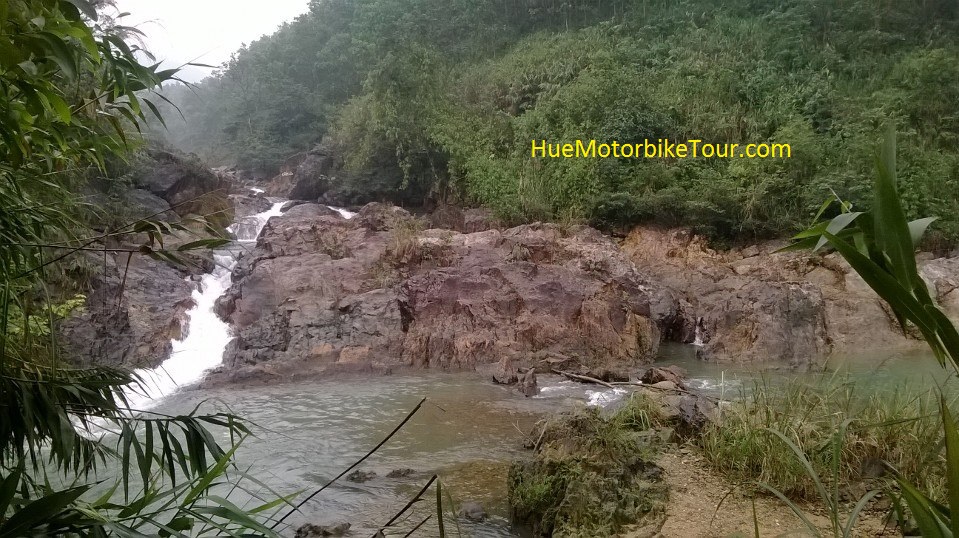 This 150km motorbike tour North Vietnam, but it promises to be one of the best parts of the trip. After getting out of the town, we’ll have a beautiful motorbike ride along the DA river, lake, this ride remind you of the motorcycle tour on coastal roads. The route is almost empty in the middle of the mountain and the river lake, a chilling experience.

After the motorcycle ride along the river, we will ride motorbike up and up to to Mai Chau valley. We will end the great Northern Vietnam motorbike tour in Mai Chau then we can spend the rest time of the day to have a short walk around the peaceful village of the Thai people.

From today we will start to ride all the way down to central Vietnam on the Ho Chi Minh trail. After breakfast and saying good bye to the host, we will have amazing Mai Chau motorbike tour through rustic villages of the Thai people and green rice fields.

When we get out of the valley, we will keep riding on a small, spectacular and paved trail along the Ma river until Cam Thuy town where we stop for lunch. After lunch, just enjoy a relaxing motorcycle tour Ho Chi Minh trail to Tan Ky. We arrive Tan Ky town and stay over night here, time to explore the chillout night around yourself

Tan Ky is known as the starting point of the Ho Chi Minh trail during the war. At that time, all the troops with foods and staffs gather in Tan Ky and start to matching to the south of Vietnam on the trail to join the war in DMZ. Tan ky now is a little town located by the sides of the Ho Chi Minh trail, it’s peaceful town surrounded mountains.

We continue the Vietnam Motorbike tour on Ho Chi Minh trail to Phong Nha Ke Bang National Park. The ride offers some stops to see the green tea farm, villages of hill tribe. Especially, the Ho Chi Minh trail motorbike ride in the afternoon offers amazing view of the mountain, it reminds you again of limestone mountains in Halong bay.

The karst formation of Phong Nha-Ke Bang National Park has evolved since the Paleozoic (some 400 million years ago) and so is the oldest major karst area in Asia. Subject to massive tectonic changes, the park’s karst landscape is extremely complex with many geographic features of considerable significance. We will arrive Phong Nha at around 4:30 pm, and if time and weather permit, we can have a short boat trip along the green river to go through some famous caves.

Unlike many other Vietnam motorcycle tour organizers, we will take you to Khe Sanh Combat base on the western Ho Chi Minh trail. The western trail is known as the hidden trail that the Us Army did never know to bomb, the trail runs through the National park of Phong Nha – Ke Bang, in more than 200 km, you will just see few other motorbikes but a lot of beautiful and beautiful mountain view.

The ride on this trail could be one the best motorcycle tours Vietnam. Especially, after getting out of the Phong Nha National park, we will get chance to visit the former US Merine Base with tunnels, Air base and a interesting museum of Khe Sanh. We will finish the great western Ho Chi Minh trail motorbike tour at about 5:00 pm.

This is another busy day of war stories and visits famous attraction, we will leave the Ho Chi Minh trail to ride on another historical HIGHWAY 9 to the east and get closer to the coast of Vietnam. It is short Vietnam motorbike tour but we should pay a lot of visits to some interesting historical sites such as: Hien Luong bridge – known as the symbol of border between the north and the south of Vietnam, museum of the 17th parallel and the famous Vinh Moc tunnel.

Vinh Moc  is a tunnel complex in Quang Tri, Vietnam. During the Vietnam War it was strategically located on the border of North Vietnam and South Vietnam. The tunnels were built to shelter people from the intense bombing of Son Trung and Son Ha communes in Vinh Linh county of Quang Tri Province in the Vietnamese Demilitarized Zone. The American forces believed the villagers of Vinh Moc were supplying food and armaments to the North Vietnemese garrison on the island of Con Co which was in turn hindering the American bombers on their way to bomb Hanoi.

The idea was to force the villagers of Vinh Moc to leave the area but as is typical in Vietnam there was nowhere else to go. The villagers initially dug the tunnels to move their village 10 metres underground but the American forces designed bombs that burrowed down 10 metres. Eventually against these odds, the villagers moved the village to a depth of 30 metres. It was constructed in several stages beginning in 1966 and used until early 1972. The complex grew to include wells, kitchens, rooms for each family and spaces for healthcare. Around 60 families lived in the tunnels; as many as 17 children were born inside the tunnels

After lunch nearby the tunnels, we will have short motorcycle tour to Hue. Arrive beautiful city of Hue at around 5:00 pm

Hue is one of 3 capital cities of Vietnam during thousand years of history, but unlike the others, Hue remains a lot of originally historical vestiges as in this ancient Capital City. Hue is also an important center of Buddhism. In Hue and its surrounding still exist tens of pagodas constructed more 300 years ago, and a hundred of temples and pagodas built in the early century. They take an important role in making Hue more attractive.

First, in the morning Hue Motorbike Tour pick you to Thanh Toan village. Here you can explore the local market and famous Thanh Toan Bridge. And then ride through the rice field to Highway 1A to visit the FISHING VILLAGE. And you can walk around to see Tam Giang lagoon-the biggest lagoon in Southeast Asia. Also you can see people live on boat and earn their life from fishing. It seems like fisher man are always happy even life maybe not as easy as they feel

Another stop is also a highlight is Elephant Spring called Suối Voi. This is an excellent natural spring that is well worth a visit. And you can swim in a natural cool water pool due to the nice weather.

Probaly, the highlight of Hue to Hoi An motorbike tour is a ride up over the top of the HAI VAN PASS route. This is as amazing as Ho Chi Minh Trail but the view of the Ocean and Mist make it different. So it take us off road through the mountain to see the Sea and Mist. That why its name is Ocean and Cloud pass.

Almost everyone love this ride between Hue and Da Nang, Hoi An

After visit Marble Mountain we ride along the coast line to Hoi An. And drop you at your hotel. Finally, tour ended here

This tour with rider and you sit behind the back seat. If you prefer riding yourself follow, please ask for the best quote. Please contact us

Motorbike Tour Ninh Binh explore Tam Coc, Mua Cave is the best way to see the stunning view. The motorbike tour in Ninh Binh with local easy rider will bring you the unique experience. This motorbike tour can start from Ha Noi or Ninh Binh for flexible to your schedule 7:00-7:30AM: Pick up from hotel […] 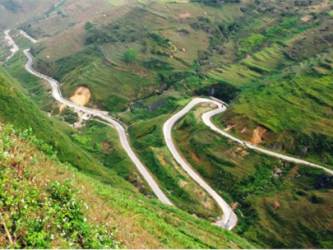 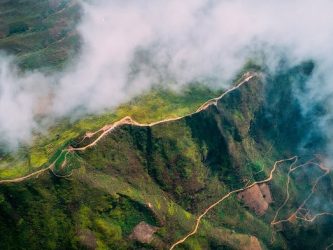 Explore Hoi An countryside by motorbike is the best way with fun and unique experience with local easyrider. The ride along the rural village in Hoi An bring you new... END_OF_DOCUMENT_TOKEN_TO_BE_REPLACED

MOTORBIKE TOUR FROM HA NOI TO HOI AN EXPLORE CENTRAL OF VIETNAM is the stunning trip. The ride on Ho Chi Minh trail make it spectacular ride as well as... END_OF_DOCUMENT_TOKEN_TO_BE_REPLACED